The idea for this monster is very simple: two heads, intelligent, casts magic, but with a twist. This is the mental process that I went through to arrive at the final product.

If you just want to see the final result, click here to go to the statblock.

This is the first of monster I share in this blog, but I hope to create many more, because I really enjoy creating them, and it is one of the elements of a role-playing game that you can’t have enough. As long as we continue playing new adventures we can use new monsters in each session.

But not only do I want to share the monster’s stats and how to use it, what interests me most in this blog is to talk about the process of designing a new monster, to make it striking, that the players remember it as a great epic battle ( or at least an entertaining fight).

The first thing I wanted was a basilisk-type monster with two heads. At some point I remembered that there is a double headed Cyclops monster that cast magic, although I’m not sure where I saw it. But from there I took the idea that the two heads did not get along very well, and they could fought each other.

Giving the monster a disadvantage just for the sake of flavor is good enough because players find it more interesting than a monster that is just very powerful. Also, finding a way to use that handicap to your advantage gives players more satisfaction than just beating a monster.

But using that disadvantage as a game mechanic seems even better to me, because you turn the monster itself into a kind of puzzle. For that, the monster’s disadvantage must be clear, but not obvious, that is, players must immediately notice that the monster has a disadvantage that they can use to their advantage, but how to use it should not be so obvious.

That way, we can make the monster look unfairly powerful at first, but after the players find the weak point, the battle turns in their favor.

A basilisk with two heads that don’t get along would be very obvious, because by putting one against the other they would turn into stone and that’s it. But you can do something similar with a two-headed hydra that casts magic.

The basic attacks of this hydra are its bites, but in addition, each of the heads has a different Innate Spellcasting. This hydra uses its tail for the somatic components of its spells, and the spikes on the tip of the tail as a spellcasting focus. That means that both heads can control the tail in any given moment.

The part that makes the encounter unfair is that one of the heads can cast the Counterspell spell at will, while the other can cast Shield at will. Worse yet, each of the heads has its own reaction each turn.

Since the hydra from the SRD has a very high Challenge Rating for what I am looking for, we will start with the stats of a basilisk. CR3, although possibly increasing when we add all of its powers.

Here is the Basilisk as it is in the SRD.

I removed the ability to petrify and added one more bite attack per turn. Then I gave it the hydra’s abilities for extra heads (except the one to regenerate and multiply heads), and also made it Huge in size category. Oh, I also removed the poison damage from its bites. And this is what we have so far (don’t mind the CR of preliminar versions, since that will be checked at the end).

There’s a note to make about the “Reactive Heads” ability, I changed it to allow any kind of reaction, not just attacks of opportunity.

For this reason, there are two ways to add the two types of reactions that this hydra has. It can be added in the Reactions part, and specify that it can only be used once per turn each, or we can do it in the simplest way, and add the spells in its Innate Spellcasting lists. And yes, there will be two lists, because being two independent heads, each one has its own list, and each one has its own reaction. The problem with this last option is that just by looking at the Stat block, it is not so clear that the hydra cannot cast two Counterspells, or two Shields, but it can cast both the same turn. Also, and this is perhaps a bit controversial, but even though the 5e rules do not prevent you from casting two or more spells in a turn, there are sometimes discussions on whether or not you can cast a spell as a reaction if you already cast a spell as an action on your turn, even worse if you can cast two. That’s why I’m going to choose the first option, which is the one that makes the monster’s reactions clearer, even though it is not the most elegant way to do it (or maybe it is?).

It should be noted that among its spells, the head that casts the counterspell is the same one that casts hold monster, and the head that Shield casts is the same one that can cast Silence and Feeblemind, that is, each head has a way of stopping the other. But how to make heads attack each other? more importantly, how to make it that players can discover this weakness? but even more complicated, how to write it in a stat block so that the GM understands it when he reads it? (that last part is not needed if you are just creating a monster for your own campaign.)

I thought about a few possibilities. The first is a feature that gives it a chance of losing its turn arguing one head with the other. The second is a Berserk state, in which the creature gains more physical combat power, which is quite low for a creature of its level, but prevents it from casting spells. The third was that the tail could be the key to its disadvantage. If its tail hits one of the heads by mistake, that head will get upset with the other head and possibly go into rage.

I picked the first one, but to make it clear that the hydra. But to make it crear how the losing of actions work, I added to each bite the possibility of losing that attack, arguing with the other head.

The way I came up with the tail to be the key to its weak point is by giving it a reaction attack. First, I added a tail attack to the hydra. Now, knowing that the hydra has only two reactions, players could try to make it use its reactions so that it cannot cast Shield or Counterspell. But even better, I added a third reaction, it is activated when some other creature passes through its space (but the hydra can still only use two reactions each turn).

According to the rules, you can pass through the space of an opponent creature only if it is two categories bigger or smaller than you, and since in 5th edition almost all player characters are medium, and this hydra is huge, this condition is met . However, this attack has a chance of failure, when it misses, the hydra hits itself.

Lastly, I changed the bite attacks so that not only can these can miss, but the chance of miss increases when the hydra hits itself, and that these misses cause it to lose reactions. This also stops the vicious cycle of hitting itself and can return to normal attack, but gives players a chance to act normally.

I also think that with all these disadvantages, the challenge rating is not so bad, and it even needs more hit points.

This is a monster that is hard to beat if you don’t pay attention, but once its weak point is understood, it is a matter of time. This is the final result:

In the future, I want these stat blocks to be selectable text, but for now they had to be screenshots of the program I use to create the PDFs. But here below I leave the PDF to download. 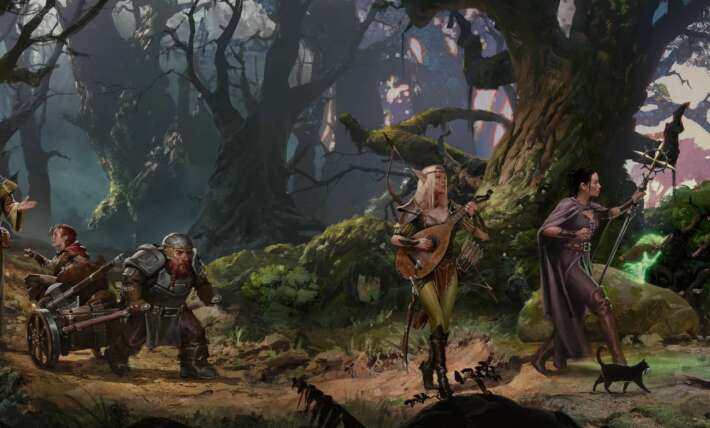 Typo in the Bad mouth section: “is” should be “if”.

Thank you, I will correct it!

What do you use to create the stats layout. It looks great.

Thank you Nick!
I made my own software for monsters. I have gradually changed the design of the statblock, now it looks a little different.