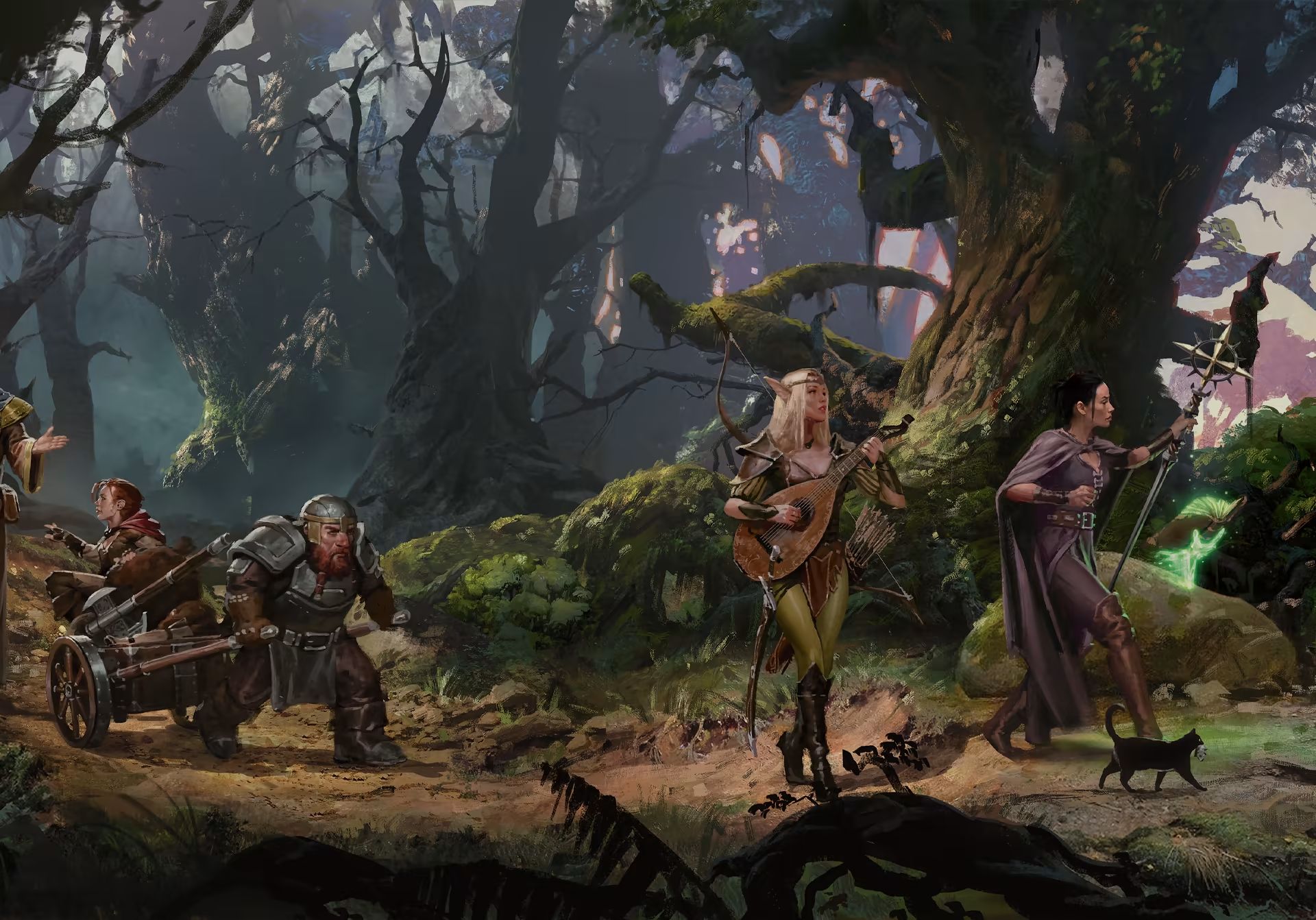 It’s often said that one of the best ways to start an adventure is in the middle of a combat. I believe that this is a good idea for both new players and those who are more experienced, because of several reasons. If you have never started a Dungeons & Dragons campaign or some other role-playing game, below I present my reasons why you should try it.

Sometimes, starting an adventure requires breaking the ice, the characters may need to know each other, or even the players don’t know each other enough. With a combat at the beginning of the adventure, the first thing the players will do is to work as a team, even if it is out of necessity.

Once the battle is over, it will be easier to continue the adventure and everyone will surely have more reasons to dialogue with each other. Possibly now they will have a common enemy or a common goal.

Establish the most important combat rules

In D&D there are almost no rules to interact with other people in conversations or the like, and I personally feel it’s okay, you usually don’t need rules for that, because what your character has to say, you can say it yourself. But combat is something you do need rules, since you can’t attack someone at the table to know if your character was successful.

Each Dungeon Master handles and interprets the rules in a different way, even the same DM can handle the rules different from one game to another, or maybe you want to try new optional rules or homebrew. In any of these cases, it is convenient to start the game testing these rules and knowing them because these can mark the rhythm to which an adventure should be played. For example, encounters can be very complicated and players should be careful before adventuring in a dark forest. Or maybe combat is more relaxed, and players are supposed to be more heroic, etc.

This is specific for new players and is also very based on my opinion. I feel that most new players understand the combat rules pretty fast, maybe because of their exposure to video games or even card games. But the simple act of interacting with NPCs and playing a character is something harder to understand. Many times, the fact that there are almost no limits, and you are free to do or say what you want out of combat makes the player do not know what to do.

Starting combat is to start on a better-known terrain for new players, at the same time, they learns the rules of the game that are “the most complicated”, before moving on to the part that is going to be actually more difficult.

Ideal monsters to start an adventure

Considering that Dungeons and Dragons is made so that the entire game can be played jumping from a combat to another combat, there is almost no downside to this option. Of course, the clear drawback would be starting the adventure with a total party kill… but on second thought, maybe it would be worse if I started the adventure by developing a character personality, just to see it dying in the first combat anyway. Dying in the first combat is a bad idea, it doesn’t matter when it happens.

There are several monsters that are ideal for being the first opponent of a group of adventurers in a D&D campaign, for example goblins and kobolds. These are also my favorites to start an adventure because they are classics and I like classics. But not everyone likes them, many have fought goblins so many times that they don’t want to see them anymore.

That’s not a problem either, there are tons of low level monsters in D&D, and I leave you here my top 10 of ideal monsters to start an adventure that are not the classic kobolds or goblinoids, or zombies or anything common in Dungeons & Dragons 5th edition.

I fought against these harpies when I played Theros and it was quite scary, but in reality the combat was not too complicated and we faced 8 of them in first level. Theoretically you can include up to 5 of them for an encounter with medium difficulty against a group of level 1 adventurers. They fly, they are screaming, horrible and evil… they are perfect.

Depending on how good the adventurers are at combat, one or two Magma Mephits make a good encounter. Not only do they deal a decent amount of damage on average per round, as they deal fire damage with their claws, but they also have a Fire Breath that they will only use on average once or maybe twice per combat, they can cast Heat Metal, and they also explode when killed, making them excellent for strategy. And there is nothing better than making players think about combat strategy from the first fight.

Another creature that causes fear, especially because it can take adventurers by surprise. The Twig Blight has the appearance of a dead twig, and can easily surround adventurers without them noticing.

I love this enemy, and it can be especially dangerous especially in combination with some other enemy that has ranged attacks with a bow or crossbow. Its Aura of Murder confers vulnerability to piercing to creatures that are close to it. However, the barbarian may not have any problem with it.

I wonder if troglodytes are a common enemy, in my playgroup more or less they are. And they are one of our favorites too. Its Stench makes players think about strategy and its three attacks per round makes it scary.

Another cool creature from Baldur’s Gate: Descent into Avernus is the Abyssal Chicken. These creatures are hideous and frightening to players just by looking at them, especially when you describe them suddenly spreading their wings and flying. All as long as you don’t tell the players what they are called, because then they’ll just laugh.

The Oblex itself is one of the best monsters in D&D. The Oblex Spawn is less exciting and less complicated, but just knowing that an Oblex can be found in the area will make adventurers very scared. Also, the psychic damage taken from a physical attack is quite disconcerting and makes players wary that something worse could happen.

Another creature that is excellent in terms of strategy against players is the Star Spawn Grue. Even with a challenge rating as low as 1/4 they can be very dangerous in combination with other creatures, giving adventurers disadvantages and enemies advantage. The best thing is that its Aura of Shrieks is 20 feet, unlike the Night Blade’s Aura of Murder which is only 5 feet.

I was about to place the Strahd Zombie in first place. It’s definitely one of the best creatures, maybe the best low level monster I’ve seen. Also, there’s no better way to tell players “you are in an unknown territory” than a zombie that looks normal but works differently and is more dangerous. However, this list is for the best first enemies in a typical campaign, and this monster’s CR is very high. Maybe just one is a good matchup against a top tier party, because of the number of attacks, but its HP isn’t enough and it doesn’t have Undead Fortitude. And two of them are perhaps too dangerous for any campaign that doesn’t have the Curse of Strahd‘s level of mortality. But if your campaign is about terror and strong enemies, this is the perfect monster to start the adventure.

This creature is not only good as a combat encounter, but also to instill intrigue in the adventure. No player is going to think that their reflection attacking them from the mirror is just a random encounter. Its creepy and will definitely make the players paranoid for a while. It may not be for every adventure, but this enemy can be one of the best first encounters in a campaign.

Well, these were my thoughts on why it’s a good idea to start a campaign or adventure with combat, and also 10 monsters you can pick as your first enemies. Overall, I think it’s always a good idea to start off on a high note, and D&D 5th edition is especially good at making combat exciting, I hope these tips help you.

What do you think of these? Do you have a favorite low-level monster that’s perfect for starting an adventure? What monster do you think would be good for a new player’s first enemy? Leave your comment below this post.